Writing AdWords copy should be easy.

After all, there’s only enough space for a few words on each line.

But there’s a lot of money riding on so few words. Choose the wrong ones, in the wrong order, and results might tank.

The good news is that you don’t have to guess. No divine intervention required, either. Instead, just follow a few simple formulas that line up with how people are already searching and you should be good-to-go.

Here are three to start with: 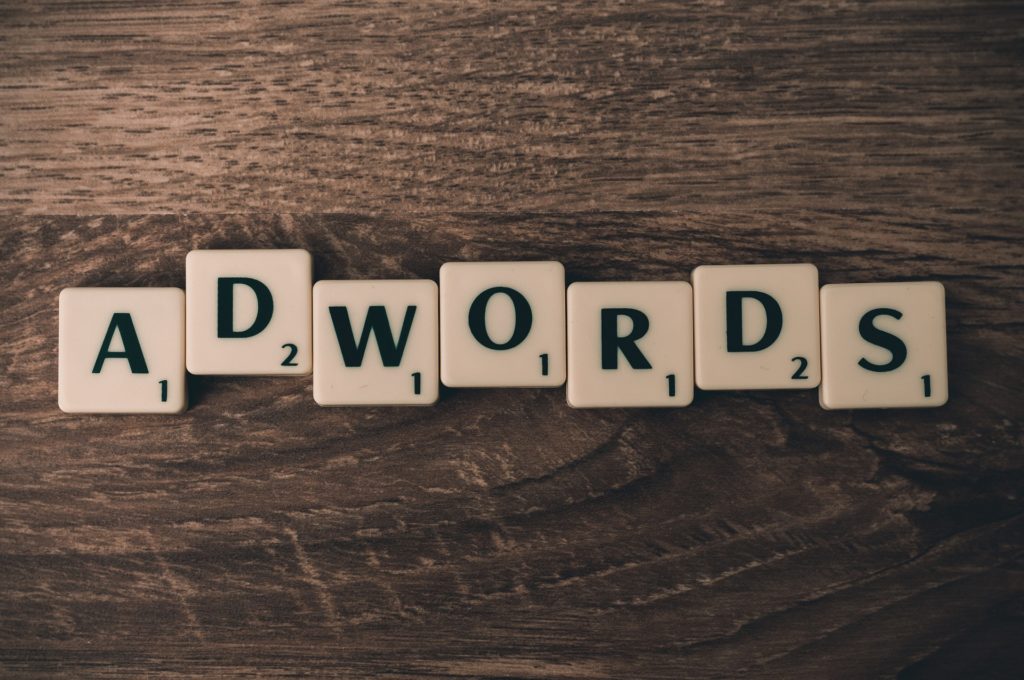 That’s good news. It means you don’t have to get overly creative or stray too far from what works. Instead, double down on the way people already search for stuff.

A local business sells a widget. Primarily in a few locations within a city. That lines up perfectly with how people search (based on your initial research inside the Google Keyword Planner, SEMrush, or SpyFu).

If your city or location is small enough, it’s easy. You just go with a direct, frills-free [Location] + [Keyphrase].

But. What if your location is massive? Super popular and competitive and generic like Los Angeles?

You need to get more specific because Los Angeles is so big and spread out. A hotel in one side of the city would be terrible for locations in the other. That could leave visitors stranded; getting a too-close-for-comfort look at LA’s notoriously awful traffic.

Instead, people will look for a neighborhood or slice within the city. Generally next to the closest attraction of interest. Could be the beach. The Getty. Staples Center. The Sunset Strip. Or Universal Studios.

That gives you two plays:

For example, that could mean “Universal City” or “Universal Studios” as your location. OR the surrounding areas of “Sherman Oaks.”

This example features the [City] + [Keyphrase]. But then it also capitalizes on the expanded headline with an additional benefit (“Luxury Hotel, Motel Cost”).

One study showed that when you take the time to re-write your ads for this new expanded format, adding an additional benefit or emphasizing your value prop, you might see a 400% CTR leap.

Local businesses have it easy because there’s not a whole lot to think about.

But what if you don’t sell local?

What if your market is borderless and the competition stiff as a result?

Easy. You go after the competition!

Generally speaking, people who do ‘branded’ searches (with a competitor’s name) are further down the funnel. That means they’re evaluating their options and looking at alternatives. Pricing out vendors to determine which is a good fit.

The social commerce space is a perfect example because it’s gone from nonexistent to an industry worth over $30 billion in the last decade.

First example. Someone looks for the 800-pound gorilla in the industry, Bazaarvoice, and PowerReviews is right there haunting them:

First, they use a simple formula to reach those who might be knee-deep in research mode (“How does MYBRAND compare?”). Then they follow it up with an expanded headline that reiterates their main value prop (less expensive).

Marketing and sales automation platforms are similar. Massive markets that didn’t exist a few years ago. A few primary players, fueled by massive infusions of capital, duking it out against each other to gain any slice of market share possible.

You’re looking for a new sales CRM. Ideally, a slimmed-down service from Salesforce. So you type in HubSpot Sales and are met with the following search results: 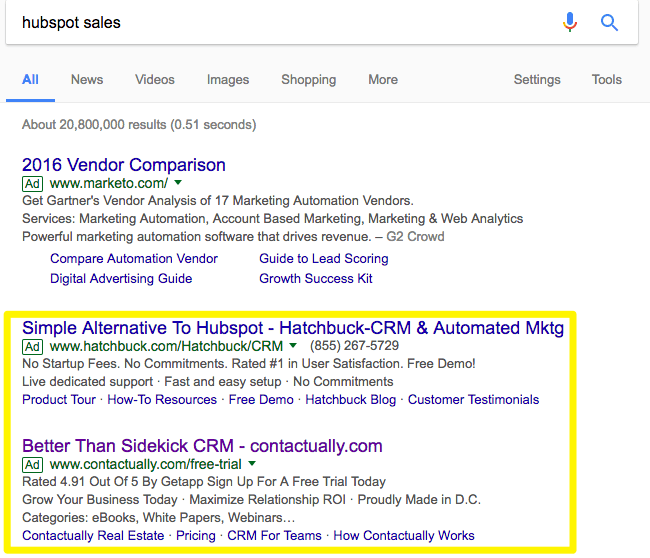 The first is a vendor comparison sheet. From Marketo. HubSpot’s primary competition. Once again, this is a perfect example because it matches the searcher’s intent (of researching and comparing vendor options).

Then places two and three (highlighted) are going directly after the brand you Googled. The first claims to be a “simple alternative.” With description copy going after the “no startup fees” and “no commitments.”

While the second is simply claiming that they’re better than the one you searched for (HubSpot Sales was formerly known as Sidekick CRM).

Both competitive ads also do an excellent job with ad extensions. The first features a phone number so you can call in directly. While the second features ratings and reviews from a neutral third party (Getapp) to bolster their “better than” claim.

Jeremy Raymond recounts one study that proved this in Secrets of Great Salespeople:

“A research project showed that when a battery was claimed to last ‘up to two hours’ customers predicted that it would last, on average, 89 minutes; when the claim was presented as ‘up to 125 minutes’, customers’ predictions rose to 106 minutes.”

That’s why numbered AdWords headlines can outperform numberless ones; delivering a 217% CTR lift and a 23% conversion lift in one study.

Two ways to implement this today.

The first is a specific discount number if you’re selling a transactional commodity and competing on price. Like ShowTickets.com does here with 45% off.

The second is the starting price for a lump-sum package. Especially if you’re in an industry where costs tend to be the opposite (opaque and commonly escalating).

That’s why this ‘all-in’ price of $995 is the perfect foil for hesitant brides-to-be.

Those two examples, while using different numbered-strategies, have something else in common. They’re both odd numbers.

A study by distribution company Outbrain found that odd numbers outperform even ones by 20%.

So… what happens when you double down and use two odd numbers?

If you’re looking for a category keyphrase like “Las Vegas Hotels,” you’re once again trying to compare different examples. (Whereas if you already had your mind up about a particular one, you would have used a branded search like the second example.)

And here’s the pièce de résistance.

Trivago takes this same strategy, but overlays the very first template we spoke about:

You get the [Keyphrase] in [Location]. But then you also get the [Hotel Quantity] from [Starting Nightly Price].

Apparently, two formulas are better than one.

An AdWords headline might only be a few simple words.

But that only increases the pressure. Each one needs to be perfect otherwise people will instantly scan past it and click on the next one.

Fortunately, there are patterns based on how people search. You can figure out what they’re looking for (and which stage of the buyer’s journey they’re in), and adapt accordingly.

That way you can use a timeless AdWords headline formula, like the [location] + [keyphrase], the competitive bid, or the oddly specific number.

Less time is wasted on being creative so more time can be devoted iterating to generate superior results.