How to Avoid ‘Direct’ Analytics Traffic to Minimize Data Losses

It may not be intentional. But the end result is the same.

We marketers base our decisions on data. Drawing conclusions and coming up with strategies based on what Google Analytics says.

So when analytics are wrong, we’re wrong.

And the results can be catastrophic.

Here’s why, and how to ‘fail-proof’ your marketing activities to eliminate these issues.

They exploded, went public, then imploded. So everyone gives them a hard time.

But they’re also incredibly savvy when it comes to engineering growth, too, as one experiment from a few years back highlights.

Analytics packages, like everyone’s favorite Google Analytics, can’t always properly track a referrer. Many times your desktop clients (like Outlook) may not pass referral data (so link clicks are obfuscated). There’s also issues on mobile devices, not to mention that whole (not provided) thing that obscures like 80% of your search traffic now.

So if Google Analytics can’t tell exactly where a visit is coming from, they’ll automatically lump them into the ‘junk drawer’ (aka ‘Direct Traffic’) like the random mail you get and would rather not deal with at the moment.

But a few years ago Groupon did the unthinkable in the name of SEO science: they purposefully de-indexed themselves.

They wanted to determine, definitively, how much of their traffic was being miscategorized. Because if Organic Search is only showing a fraction of the traffic, leads, and customers that it should be, it also gets a fraction of the respect, budget, and resources internally in every company.

They exclusively examined ‘longer’ URLs (to subfolders like “www.groupon.com/local/san-francisco/restaurants”) because the chances of people typing those in directly is slim to none. 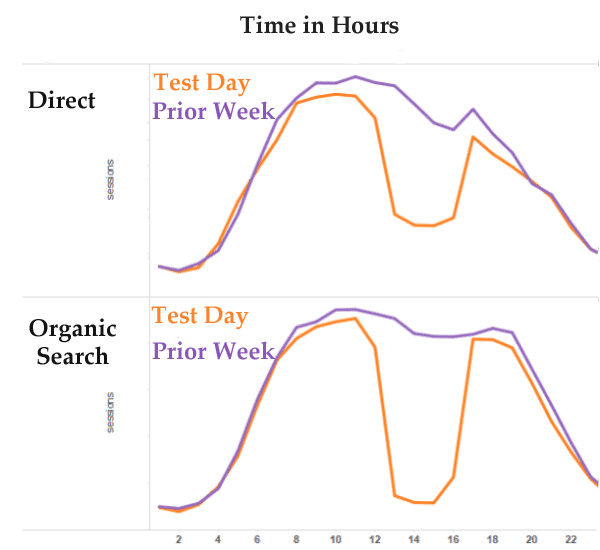 What does that mean?

That 60% of Groupon’s ‘Direct’ traffic to those specific pages wasn’t Direct at all. But something else. Most likely SEO or organic search traffic, with some social and email as well.

Imagine them being misreported. Or underreported to be more accurate.

This kind of data loss would naturally lead most companies to internally under-staff, under-fund, and under-respect those channels proportionately.

How to Force Google Analytics to Tell the Truth

Fortunately, there is a solution. It’s not easy or foolproof. But it’s a start.

And it’ll help you force Google Analytics to start telling you the truth. Or else.

Step #1. Properly Identify Each & Every Campaign

Let’s start by controlling what you can control.

Specifically, all of your current promotional activities.

Inbound funnel segmentation refers to the (time-consuming) process of breaking down campaigns into individual channels. That way, each one gets its own dedicated landing page and ‘conversion funnel’ to keep things nice and simple. 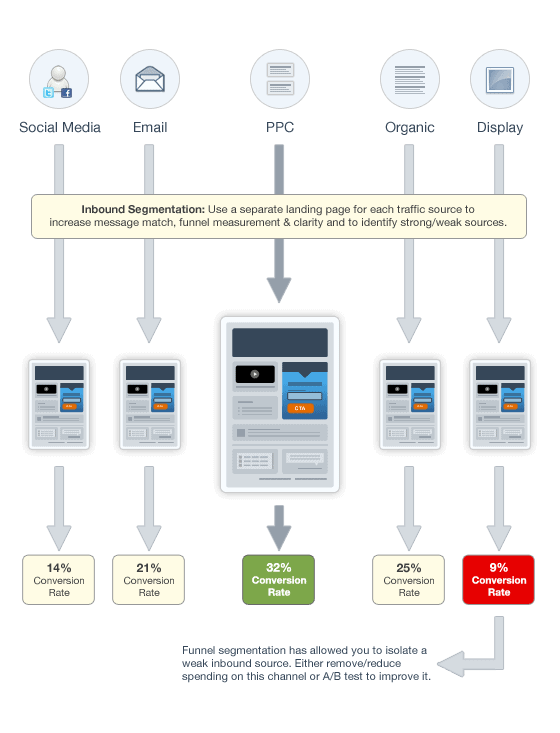 Think of trying to generate leads in a Quote / Proposal form. Instead of forcing multiple traffic channels into the same one (and seeing conflicting or misleading data), you split them up into one for Email, one for PPC, one for SEO, and one for… well, Direct.

Now you can compare submissions and conversion rates among each to more accurately determine the value each channel is attributing.

It’s not perfect. But it’s a start. And you can make it even more granular with UTM tracking.

Step #2. Tag Each Link Within Your Campaigns

Most marketers have used UTM codes at one time or another.

But rarely are they used consistently and accurately across campaigns.

For example, all social channels just get a Social campaign tag. Call it a day.

When in reality, Social Sharing should be a major group with multiple UTM codes set-up underneath for each one you use. 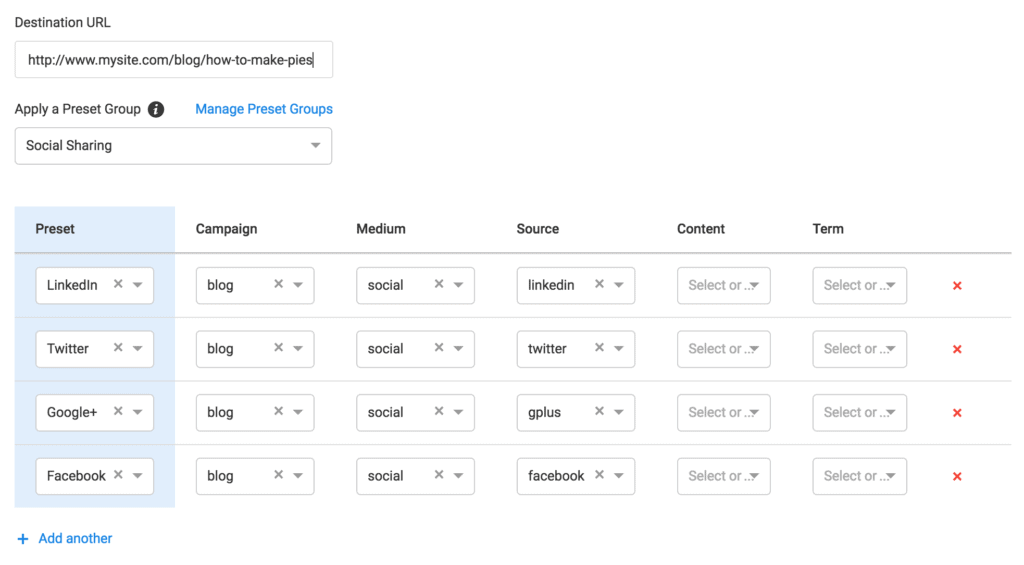 Multiply this effort across each other channel and you’ve now got a powerful way to report results (more accurately) across the board. 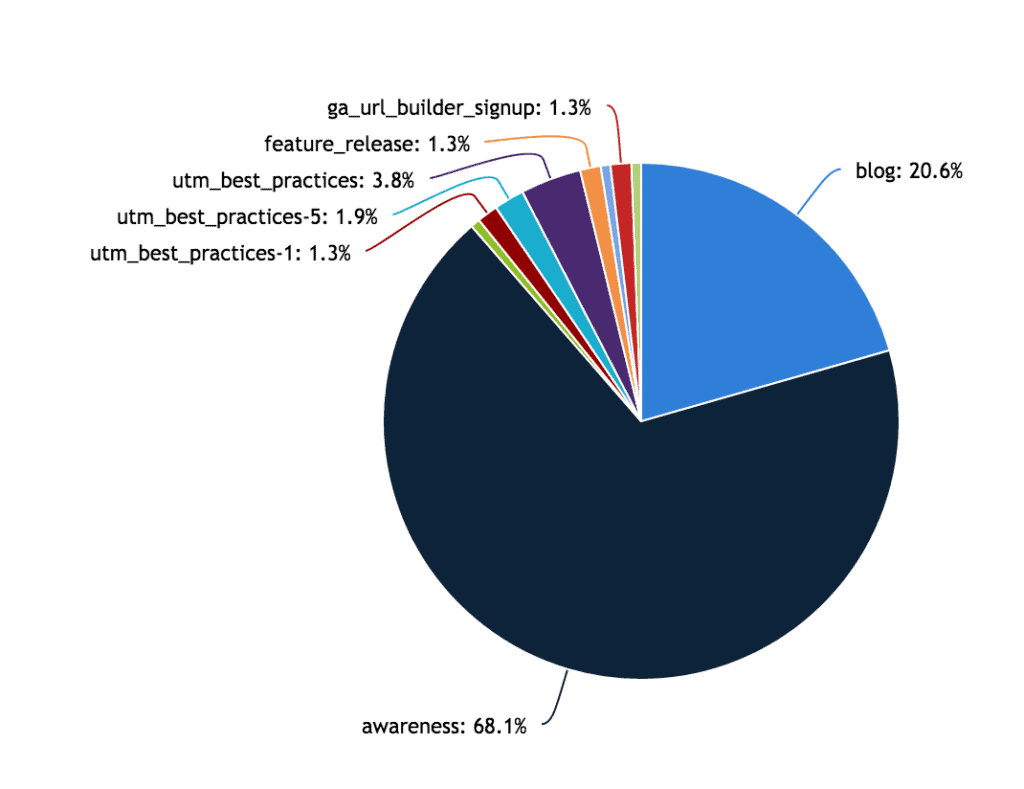 Perfect. We’ve made great strides. The future version of us in a few weeks will be incredibly happy and less stressed.

But there’s still one more critical step to take before we can take it home.

These visitors have intent so they convert pretty quickly. They search, click, and call or submit.

You know that Campaign A generated 5 leads and Campaign B another 3. But that’s where most companies stop.

They have no idea how those individual leads are converting. Or what (if anything) they’re ultimately paying to the company.

So close the gap. Admittedly it’s a little tricky depending on what software your company already uses internally. But even the free version of HubSpot can help tremendously (in the interim) so you can start seeing which campaign keyphrase generated John Smith and how much he’s paying you over time.

For example, I recently saw this on a client site:

Stick with me for a second because you kind of have to read between the lines a little bit.

But that last column is supposed to tell us how this lead (who’s name is blurred out over on the left) initially found the site prior to converting.

And it’s telling us Direct. Here’s the problem.

How many cold visitors (i.e. first-time visitors) do you know that will type in a web address directly and convert on the same visit?

Less than 0.05%? The only exception would be if someone heard about you offline and then went back to their office to type in your address. (But even then, they would more likely just Google your name which would then show up as an Organic Search, and not Direct, visit.)

Instead, when you’ve taken the first two steps and then set up lead tracking you should see something like this:

Real names and keywords are blocked to protect the innocent. But now we can not only see where this person came from initially, but more importantly the specific keyphrase they used and ad they clicked on.

So in a few weeks when they become a paying customer, we can successfully determine which key phrases and ads inside of a single channel are generating the best results. And compare that to every other channel accordingly.

Today it’s common for customers to bounce from device to device and channel to channel several times before converting.

Add that to the fact that it’s common to have referrer data stripped out before hitting your website and it’s no wonder that Google Analytics isn’t always 100% accurate.

Setting up inbound funnel segmentation and properly using UTM tracking consistently is a good start. But it’s only when you add in lead and customer tracking that you can begin to see the full picture.

Google Analytics does its best. But at the end of the day, it’s your results that suffer the penalty when all of your hard work goes directly into ‘Direct’ and that digital paper trail is lost forever.

Remarketing vs. Retargeting: The Complete Rundown